Introducing: The Door Of Perception! 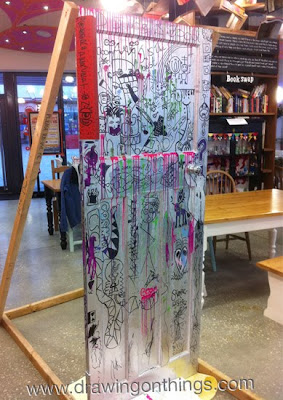 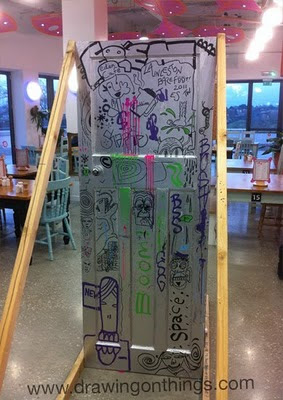 This is a new drawingonthings workshop where spontaneous doodles are drawn on a freestanding door by any number of people present.
Sounds simple. But, is it?

Yesterday I took"The Door Of Perception" to The Eden Project's EDEN CAFE in St Austell's new White River Place for local young people visiting the cafe to draw on as part of a Barefoot Games workshop. The ideas and images that emerge will be discussed and used in further community projects and activities.


Why "Door Of Perception"?
Since William Blake inscribed the immortal lines in his poem The marriage of Heaven and Hell into a slab of molten granite on top of a ferocious volcano somewhere around the dawn of time, man has held the humble door as a totem symbol of our understanding of the universe. Blake:

"When the doors of perception are cleansed, man will see things as they truly are, infinite."

Author and creative adventurer Aldous Huxley read Blake during his A-levels in the 1940s, and used the term for the title of a book in the 50's. Rumor has it that he gave a copy of his book to a young Jim Morrison at a party on Venice Beach ten years later.

Jim was looking for a slogan at the time as he had recently began printing t-shirts with ink and a simple silk screen press he had bought from Andy Warhol who was recently at Venice on his summer vacation from New York.

Jim went on to sell thousands of CLEAN THE DOORS t-shirts to people on the beach that summer. The slogan had CLEAN written in small, red letters and THE DOORS in big, bold, black capitals underneath.
A somewhat bizarre motto for a celebrated "genius" to come up with, but the hippies loved it!

Anyway, to cut a long story short, the red ink Warhol had sold Jim was a dodgy batch he had made while experimenting with tomato soup, and it faded in the sun!

Morrison was in an unknown band at the time called The Chairs, and they were going nowhere, fast! When the band were looking for a new name, keyboard player Ray Manzarek pointed to the hippies walking round in t-shirts with just THE DOORS written on the front in bold, black helvetica font... and the rest is history.

So it seemed to me perfect sense to carry a phrase with such lineage forward into a new era.
Posted by Cosmic for Unknown on 1.4.11

Just been reading your 'lineage' of the Doors. I love it.

Haha! Thanks Barbi. I always forget to check comments on here and am catching up.

Thanks for your support! I had a great piece of feedback from Launceston Town Council about the butterfly wall we did, by the way. Hope to catch up with you guys soon x