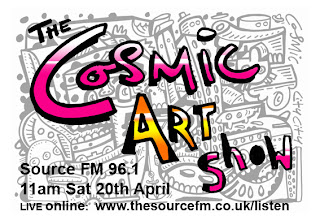 The Source FM is a community radio station in Falmouth, Cornwall. It is live online at www.thesourcefm.co.uk/listen
I'm Cosmic, a contemporary "street" artist based in St Agnes Cornwall, I do loads of artwork in Falmouth and all over Cornwall and the UK.www.drawingonthings.com
This is the first ever Cosmic Art Show! In fact this was my first radio show ever, hijacking The Funkin' Art Radio show that normally airs on this station at this time. I took on of it's DJ's, Lizzie along with me!
I had some very brief training the day before this show aired and then I was thrown in at the deep end.
This show's guests were:
Dilk is one of the best oldskool graffiti artists in the country. He calls in from his graffiti supplies shop in Nottingham. montanashopnottingham.com/talking tips and a Saatchi gallery show he's been working on.
Mr Penfold is a leading contemporary artist, known worldwide for his colourful characters and unique images. He calls in from London where he has been drawing live for a project for the Saatchi gallery, along with Dilk.www.facebook.com/pages/Mr-Penfold/32281712075
The Aggie Boys Choir from St Agnes (of which I just happen to be a member!), sang two songs live on air before we sing at a sea shanty festival the next day in Perranporth. This is a relatively new sea shanty band and we are all (relatively) young sea dogs. Our songs are all original and written and directed by Samuel Stephens from St Agnes, who leads the band.
www.facebook.com/aggieboyschoir?fref=ts
Kevin Murphy from The Cads and Bounders, who are raising money for charity by driving the Mongol Rally, rings in as they are searching for a free car in Cheshire. They are going to be our news reporters on the show however, this week I ran out of time and didn't manage to call them back. Sorry boys! If you have a car, which is less than 2500cc, that you can give them drop me a line.
www.facebook.com/TheCadsAndBounders?fref=ts
Art needs people that make things happen. One of these rare creatures, Meena Rajput, who single-handedly revolutionized the international surf industry by sponsoring artists when they were completely unheard of (singer Ben Howard, the band I Am Giant and me! to name just a few) calls in about following her own dream cycling across the USA.
uk.virginmoneygiving.com/fundraiser-w…megabiketrip
and listener Sharon Trudgeon of Truro (a friend of mine) brought her car in for me to paint on, live on the radio!
See a pic here: po.st/QDfv8k and insta/twitter #cosmicartshow
Enjoy x
Cosmic 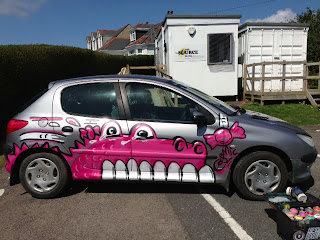