GET STONED WITH COSMIC JAGGER This thursday nite, perranporth 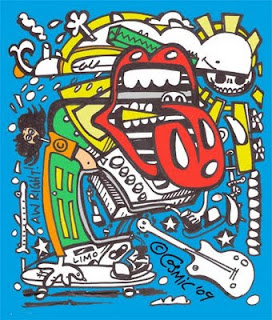 i used to do some stones gigs with very competent musician friends, we were called the Cosmic Stones (previously to that, the Rolling Pancakes- its a long story!) the line-up changed quite a bit and lots of very loud, late and heady nights were had by all.
so last week i get a call from bono.. "you wanna do a gig?". "sure, bono! i'll be there!! give my love to ireland and the edge" . "its not that bono.. its ryan bono jones from the hitchcock rules..".
it was too late, i had said ill do it.. and just because this bono doesnt wear wrap-around sunnies and hang out with handlebar mustachios.. actually he might! ..but its still no reason to go back on my word.
This Thursday, 3rd sept
Seiners, Perranporth
8pm-late am
down by the beach car park
lots of other stuff too, cheap beer, loose women, rock n roll excess, tv's out the window.. you get the idea
Posted by Cosmic for Unknown on 2.9.09