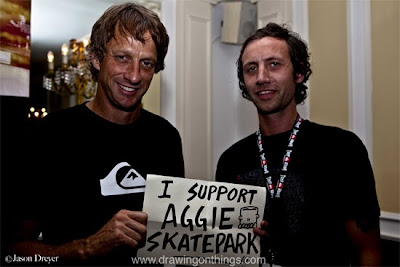 This week I met Tony Hawk! It has been almost a year since I got sponsored by Quiksilver. During this time I have been drawing at shop openings, painted surfboards, skateboards, drawn all over trade show stands with spraypaint, released a limited edition tee, drawn at comps and festivals so obviously I meet pro surfers and skaters at these events.

This week I was invited to Brighton to watch the Tony Hawk and Friends show which Quiksilver had organised on the seafront and I met the man himself, biggest legend of skateboarding who has been at the top since I started skating in 1984-85.

Tony Hawk was really cool to talk to (considering he was to skate in front of thousands ten minutes later) and when I told him the story of St Agnes needing a skatepark he insisted on supporting the cause!

There was a free bar in the vip area and an after party which got pretty loose at a club up the seafront. There was some amazing art, with huge murals in the smoking quad painted mostly in spray paint. and four huge wooden sculpture figures perched high up on a roof.

Kevin Staab is also a proud ambassador of the St Agnes Skatepark! 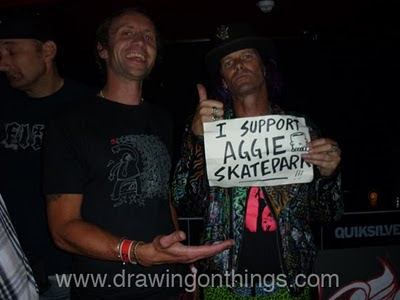 All the music on the day was good, the DJ at the beach played the most classic anthems of skateboarding culture over the last 1000 years including Black Sabbath, Iggy and the Stooges, Ramones, Black Flag etc, as the two american compares kept everybody hyped up. Then Maximo Park took to the stage, I hadn't seen them live before. Their show was energetic and they went all out to entertain. The DJ at the after party played some unreal dub, hip-hop and electro funk.

The whole day was amazing, Quiksilver had pulled it together and the whole event ran really well. The level of skateboarding ability was insane and it must've been a really inspiring show for any young skaters there.
Posted by Cosmic for Unknown on 25.7.10